Reports of a Selection of Meetings in 2007

Mulled wine helped to warm members and visitors who attended Sonia Hawes’ talk in February on Antarctica. She and her husband Mick made the trip last December to an area which is one of the most beautiful places on earth and, because of global warming, is currently at the forefront of the news.

She illustrated her talk with images of the amazing landscape, fascinating wildlife and anecdotes about people such as Sir Peter Hilary who were also on the trip. Afterwards there was an opportunity to examine albums of photographs, paintings and sketches.

Many thanks Sonia for a really interesting talk and for sharing your thoughts and experiences.

Sheila Trigger, our speaker for April, is an expert quilter who teaches two days a week at the Bramble Patch in Weedon.

Sheila had brought along a large selection of her work and members were able to examine beautiful examples of quilts, throws, waistcoats etc. many of which were reversible. The workmanship was exquisite. There was also a sample book of blocks (squares of approximatately 12 1/2″) which she had made for her City and Guilds qualification.

She told us that although Americans thought they had invented quilting, it had been taken there by the Pilgrim Fathers and was, in fact, of earlier Asian origin.

After a short tea break, the 18 or so ladies present were given 7 cotton hexagons (with paper inserts) and needles and thread. Almost silently (a novelty in itself) they were sewn, with varying degrees of expertise, into something vaguely resembling a flower. We could construct these into a quilt – or at least a throw – but would need someone to oversee the project. Any volunteers?

Our thanks to Sheila for a most instructive evening.

Sadly, rain prevented our planned game of Kwik Cricket in June, but we hope it can be rescheduled. Many thanks to Andy and Sharon for all their efforts.

Our back-up plan of skittles in the games room of the Royal Oak did, however, allow more time for drinking and gossiping, something we do extremely well. The 15 members formed three teams and battle commenced amid much noise and raucous laughter. There were varying styles and degrees of skill, one member (and I insist she remains nameless) failing to hit a single skittle on three occasions!

The winners, with a score of 183 were Angie, Caroline (captain), Gwen, Marti, and Sara just 7 points ahead of the team in second place.

It has to be acknowledged that the losers on 156 made a valiant effort, were fast closing the gap and could easily have won had the game gone on longer – or maybe not…

The evening concluded with sandwiches. Many thanks to Bronni and Justin. 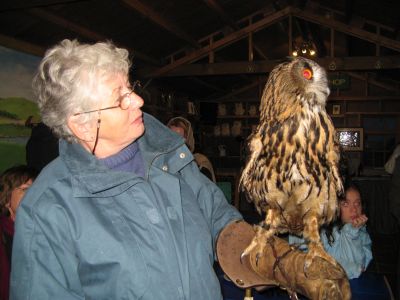 Eydon Ladies’ Annual Challenge took place on Wednesday, 18th July. This year it took the form of a walking treasure hunt kindly compiled by Sue and Kevin Lodge who distributed maps and questions to the teams before sending them on their way.

The weather was beautiful and the teams, fiercely competitive as always, thoroughly enjoyed walking around the village peering at houses, etc. in an attempt to solve the clues. Then it was back to the home of Ann and Frank Hedges for a superb barbecue and a glass or two or three of wine.

Once the papers had been marked, Kevin announced that three teams were equal with 25 points. However, after the tie-breaker the overall winners were the Dynamic Trio. Congratulations to Carol, Jo and Pauline, whose names will appear on the new plaque to be displayed in the Village Hall.

Many thanks to Kevin and Sue for setting the challenge, Ann and Frank for their wonderful hospitality and finally Peter and Todd who acted as marshals from the comfort of the churchyard.

Around 50 Eydon Ladies and friends enjoyed a splendid Harvest Supper in October. David Eyes superbly carved three pumpkins into the Eydon Ladies logo and the words Harvest and Supper. Marie Eyes decorated the tables beautifully and a team effort ensured the diners thoroughly enjoyed their meal of chicken broth and apple crumble.

Following the meal Alan Watson persuaded members and guests to part with their cash during the now-customary auction.

As a result of all this activity Sue Russell (right), chairman of Eydon Ladies, was able to present a cheque for £450 to Sheila Norton, of Katharine House, the Adderbury hospice. On the left is the Ladies’ treasurer, Barbara Butler.

Never one to miss a trick, Sue urged everyone to make a date for the next Harvest Supper on 15 October 2008.

The Documents Section now contains the 2021 edition of Eydon's Welcome Pack - for those new to the village and those wanting to catch-up with the numerous groups and societies the village has to offer!