Eydon Mummers was formed (revived?) at the end on 1991 by a group of villagers and friends, when a copy of the traditional Eydon Mummers Play became available. 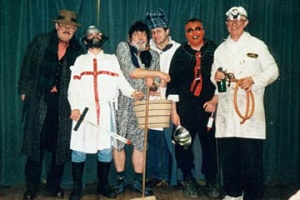 Since that time we have revived the tradition of sudden, largely unannounced (and usually under-rehearsed) performances of the Eydon and other Mumming plays at pubs and venues around the village at Christmas time, collecting money for a different charity each year.

In recent years the Mummers have raised money for Kathryn House Hospice for sick children; research in to Crohn’s Disease; the causes of Cot Deaths; support for the international development agency, Intermediate Technology, and other good causes.

For Those Who Don’t Know What Mummers Plays Are…

Mummers’ plays are a last vestige of the old fertility rites performed in mid-winter to bring life back to the world.

They are related to similar myths and legends world wide, such as the Greek Myth of Persephone. Like these, the Mummers’ play always has a cycle of death, followed by resurrection by magical means. In the Mummers’ plays this cycle involves a fight between the Hero and the Villain in which one (or both) get killed. The corpse is then magically brought to life again by the Doctor. There then follows some ‘business’ by other characters, mainly as an excuse to extract money from the audience. This money was traditionally spent on drink and was probably one of the main reasons for the preservations of the plays up to the Victorian times, when such goings on started to be looked down up on. The plays were passed down orally and some have became garbled over the years, as each player would only know his (never her) own part, not those of the other players. This has lead to some strange lines and names, for example in one play the villain’s name has changed from the Turkish Knight into a turkey snipe.

There are over 900 Mummers’ plays of one sort or another recorded in Britain and the names of the Hero and Villain reflect local traditions. The Hero is usually England’s Patron Saint, St George, although in some plays this was changed, presumably in Hanoverian times, to King George. Some Scottish Mummers’ plays have William Wallace as the Hero. The Villain varies more widely and he may be the ‘Bold Slasher’, the ‘Turkish Knight’ or the ‘Black King of Pardine’. In some plays from the south of England, ‘Old Boney’ (Napoleon) makes an appearance as the Villain.

Eydon has its own Mummers’ Play, recorded from a Mr W. Brum, “now at Brackley Workhouse”, who “learend from older mummers“.

As the workhouse system ran down early in this century, and Mr Brum was presumably an old man remembering events when he was still at Eydon, it seems possible that the performance of the Eydon mummers’ play died out in the middle of the last century. (Having said that, there is some information coming out of the work of the Eydon Historical Research Group that suggests that it may have carried on up to the First World War.) The Eydon Play, as Mr Brum remembered it, was unusual in two respects. First there are a large number of characters, 9 instead of the usual 5 or less. This is in keeping with the topography of the village as a compact group of farms and houses, with no outlying farms. There is a theory that in those parts of the country where the Enclosure Acts led to new farms being built away from the village on the newly enclosed lands, the number of actors in the play dropped. The outlying farms meant more time walking and less performing, so less money was raised. Fewer actors meant that there were fewer throats to share the beer money between!

The most interesting character in the Eydon Play is that of the Villain. Unlike the Turkish Knight, or the Bold Slasher of other villages, Eydon, and its close neighbour at nearby Sulgrave, is unique in having the ‘Duke of Cumberland’ as its villain and killer of King George (historically his father!) He was also the killer of many Scots at the battle of Culloden, where he put down the Jacobean Rebellion of 1745 with such brutality as to earn the title the Butcher of Culloden. Quite what he had done to earn the dislike of the locals in remote South Northamptonshire isn’t recorded!

Anyone with an interest in Mumming Plays could contact the Mumming Archivist of the Morris Ring, Mr Ron Shuttleworth (01203 676 721), who has an unrivalled collection of Mumming Play scripts, photographs and other items.

Eydon Parish Council Meeting will be held on Wednesday 9th February, 2022 at 7:30 PM

The Parish Council Meetings are held in the Village Hall and open to members of the public to attend and view proceedings. The agenda should be available on this website and on the Parish Council notice board a minimum of 3 clear working days before the Meeting. Any public comment or participation is at the discretion of the Chairman of the Meeting. Further information may be available from the clerk.

The Documents Section now contains the 2021 edition of Eydon's Welcome Pack - for those new to the village and those wanting to catch-up with the numerous groups and societies the village has to offer!